Mr Hinton, who now lives in Canada, shares the award with Yoshua Bengio and Yann LeCun – two other proponents of deep learning, a popular form of AI.

“The three of us have been the people who most believed in this approach,” he told BBC News.

“It’s very nice to be recognised now that it is fashionable.”

A deep neural network uses many layers of artificial neurons, loosely mimicking the structure of animal brains. Such AI is increasingly used in products that people use every day – from smart speakers to Facebook.

Deep learning is also seen as a promising, though not flawless, tool for the development of self-driving cars and other futuristic technologies.

The 2019 Turing Award recipients’ various engineering breakthroughs – made independently and, in some cases, together – had turned deep learning into “a critical component of computing”, according to the Association for Computing Machinery, which announced the award.

Prof Hinton, who works for the University of Toronto and Google, told BBC News he and his co-recipients had all pursued deep learning even when it had been unusual to do so.

“I think it’s great that the computer science community has recognised that this stuff is not flaky,” he said.

“For many years, they thought that neural nets were not respectable.

“I think we’re just at the beginning of a big revolution.”

The other recipients have also responded to the award announcement.

Yoshua Bengio, who is a professor at the University of Montreal, said on Twitter he was “extremely honoured” to be a recipient.

And Yann LeCun, director of AI at Facebook, said he was “very honoured and thankful”.

Sir Tim Berners-Lee, the British inventor of the world wide web, won the Turing Award in 2017.

What is ‘deep learning’?

Deep learning involves building computer programs that loosely mimic the structure of animal brains, with many layers of artificial neurons that process data.

When such networks digest data, their many neurons have individual responses within each layer.

These outputs are passed to the next layer until the network finally forms a decision or judgement about the input.

A system such as this can learn, for example, to transcribe human speech or recognise a person’s face in different photographs.

In 2015, Prof Hinton told BBC News he did not fear a hostile attack on humanity by AI, though he acknowledged there was still “a lot to worry about”.

When asked after his award win about the ethical questions around how AI could be misused, he said: “If you get something that increases productivity, it should be good, whether or not it actually is good [and] helps people in general is a question for the political system.”

When Prof Hinton finished his PhD in the 1970s, he found it difficult to find a job working in AI in the UK, which prompted his move to Canada. He is now a British and Canadian citizen.

However, he said the prospects for AI researchers in the UK had since improved greatly.

“You have big labs like the Deep Mind lab and there was nothing like that in 1978,” he said. 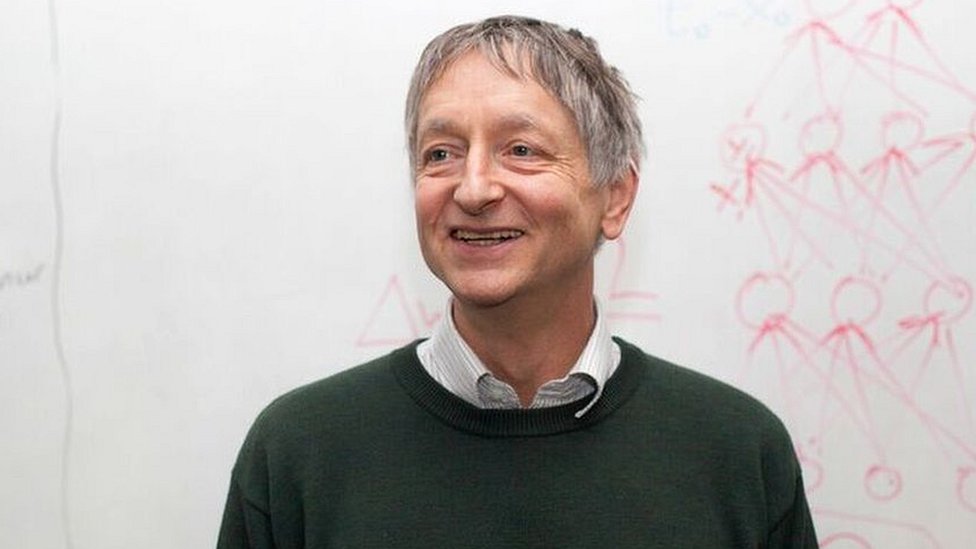