Beats has long been a power player in the consumer audio market, and since its $3 billion acquisition by Apple in 2014, the company has gone from strength to strength.

Now Beats is gearing up to release its first ever true wireless earbuds in May, the Powerbeats Pro – but will Dr Dre’s brand rival its parent company’s iconic and recently updated Apple AirPods (2019)?

Although we’re yet to test the PowerBeats Pro extensively, we’ve had the chance to try them out briefly, as well as take an in-depth look at the technical specifications released by Beats. Of course, we’ll be sure to update this article once we’ve been able to review the Powerbeats Pro as thoroughly as the Apple AirPods (2019).

The updated buds don’t differ significantly from the originals, but they do offer wireless charging, as well as “faster connect times, more talk time, and the convenience of hands-free Siri” thanks to the inclusion of Apple’s new H1 headphone chip.

As Apple is Beats’ parent company, the Powerbeats Pro contain the same H1 chip, which means much of the functionality is shared between the two true wireless earbud models.

The main difference between the earbuds is their purpose; while the Apple AirPods (2019) are designed for casual listening, the Powerbeats Pro are made for listening to music while working out.

The Powerbeats Pro, on the other hand, will be significantly more expensive when they drop in May, with a price tag of $249 / £219 / AU$350. This is around the same price as the Sennheiser Momentum True Wireless earbuds, which impressed us with their stylish design and high quality audio.

Whether the Powerbeats Pro’s high price is justified in terms of design, features, battery, and audio quality won’t be clear until we conduct our full review, but we’ll update this article as soon as we’ve tested them more extensively.

The design of the Apple AirPods (2019) is incredibly distinctive, with those long, stem-like protrusions and classic Apple all-white color scheme.

It’s a divisive design, and many either love it or hate it; after all those stems were derided when the original AirPods were released in 2016.

The AirPods (2019) draw battery from a pillbox-like charging case, which allows you to check the charge status of the earbuds via a small LED light.

True to Apple’s rigid design aesthetic, the AirPods (2019) don’t feature replaceable silicone eartips or water-resistance, and while they felt fairly secure when we tested them, we probably wouldn’t use them for working out.

The Powerbeats Pro, however, are built to be used while exercising, with a water-resistant design (so you’re protected during sweaty sessions at the gym), as well as ear hooks to keep them snugly in your ear while running.

They also come with removable silicone eartips in a range of sizes, so you should be able to find the right fit for you fairly easily.

The AirPods (2019) and Powerbeats Pro share many of the same features, as they both contain Apple’s newly-designed H1 chip. If you’re using either model with an iPhone, you only need to open their charging cases for the option to pair to pop up on your screen.

The Powerbeats Pro also feature two beam-forming microphones on each earbud to filter out external sounds such as wind and ambient noise, as well as a super-sensitive speech-detecting accelerometer in the bud that’s used to enhance speech recognition, so they should pick up your voice really well.

Both models sport physical touch controls if you prefer not to look as though you’re talking to yourself in public; the AirPods (2019) allow you to assign one double-tap control to each earbud, which we found slightly limited the amount of things we could actually achieve.

The Powerbeats Pro, on the other hand, have physical volume and track controls on each earbud and are fully ambidextrous – this means that the same gestures work in exactly the same way no matter which earbud you tap.

Both the AirPods (2019) and the Powerbeats Pro contain long and short-range optical sensors that allow the earbuds to automatically play/pause when you remove them or and place them in your ears – a useful feature if you quickly need to tune into your surroundings and don’t have time to pause your music.

The Powerbeats Pro trump the Apple AirPods (2019) in terms of battery life, with around nine hours from the earbuds themselves, and around 24 hours of battery life when combined with the charging case.

In comparison, the AirPods (2019) have five hours of battery life within the buds, but makes up for this with the additional 20 hours of juice contained within the wireless charging case.

You get the same amount of battery if you opt for the AirPods (2019) with the cheaper standard charging case.

Not too long ago, true wireless earbuds had a terrible reputation for audio performance, but they are getting better all the time – and the AirPods (2019) and Powerbeats Pro are both examples of this.

The AirPods (2019) have a lively, powerful presentation although they can sound slightly harsh when it comes to higher-frequency sounds, and they aren’t the bassiest earbuds on the market.

While we haven’t tested the Powerbeats Pro extensively yet, we were able to listen to them briefly, and were impressed by the amount of sonic power they generate, despite their small size.

Beats says that this is partly down to the inclusion of linear piston drivers that displace air efficiently to create “a powerful acoustic response”. This could mean that the Powerbeats Pro have a bassier soundstage than the AirPods (2019), but we can’t be sure until we carry out our full review process.

Beats also claims that the Powerbeats boast  “incredibly low distortion and great dynamic range across the entire frequency curve”, but we’ll need to test them more thoroughly before we can confirm this.

It’s difficult to definitively say whether one of these true wireless earbud models is better than the other without having thoroughly tested the Powerbeats Pro, but it’s clear that they have been designed with different needs in mind.

While the AirPods (2019) seem to be suited to casual listening on the go, the sporty design of the PowerBeats Pro makes them more suitable for use while working out, particularly as Beats has focussed on creating snug and secure fit with those ergonomic ear hooks and adjustable ear tips.

Until we’ve reviewed both models fully, we can’t speak to whether the Powerbeats Pro or the AirPods (2019)come out on top in terms of sound, but we can safely assume connectivity and pairing times are near-enough identical, as both models use Apple’s newly designed H1 headphone chip.

Aside from the variations in design, there’s one other big difference between the two true wireless earbud models: the price. At $249 / £219 / AU$350, the Powerbeats Pro are nearly $100 more expensive than the AirPods (2019); a sizable contrast considering the two models share a lot of the same technology, including wireless charging and Siri-enabled voice control.

So, what do you get for that extra $100? You get an earbud which is made for sports, and the ability to personalize them with adjustable eartips and a variety of color-ways – unlike the AirPods (2019). 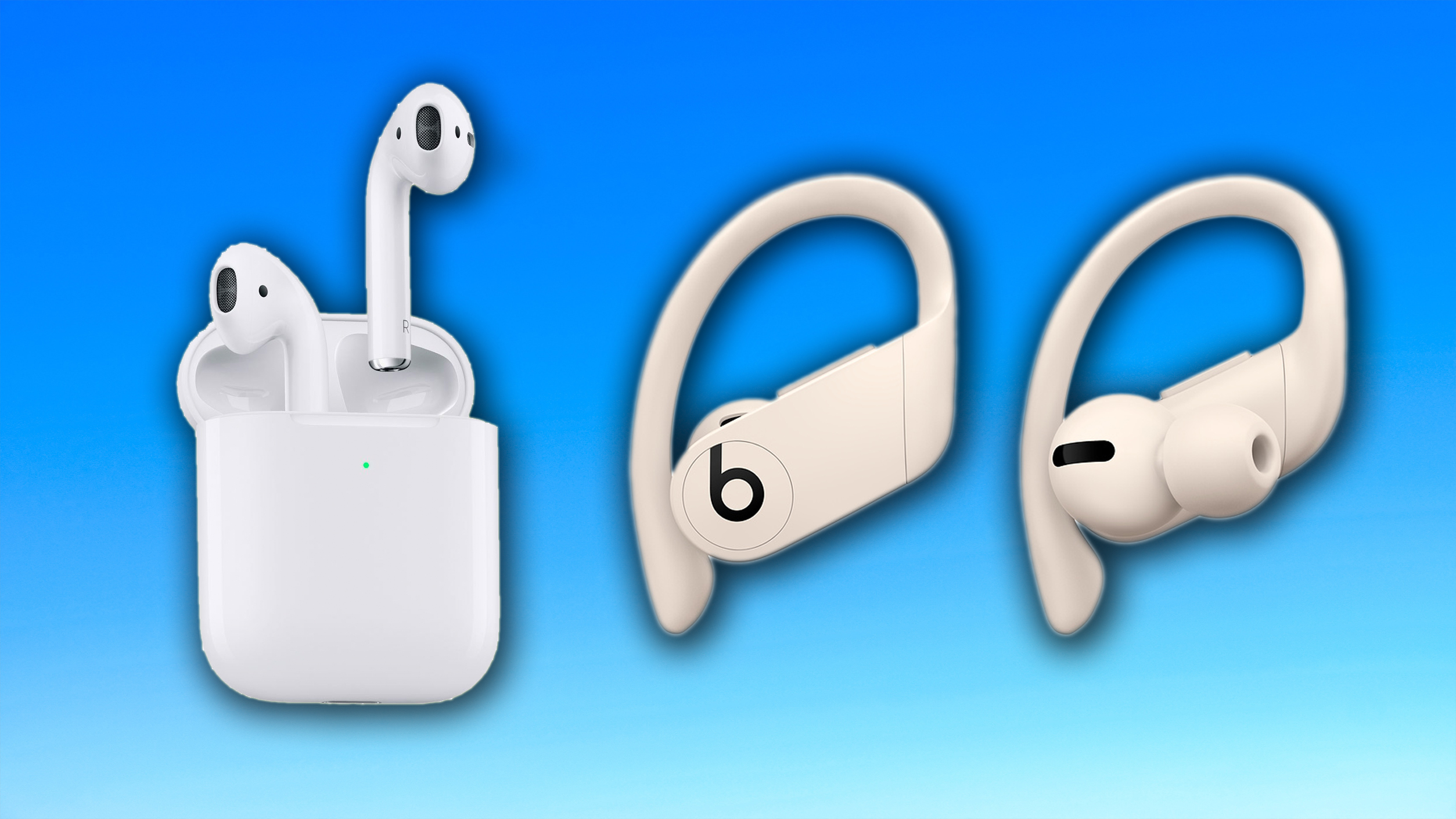